With renovations taking place in the Sanctuary, the organ console was removed and the new console has arrived and can be heard on Sunday mornings.

We bid farewell to St. Paul’s Pipe Organ which was built in 1941, during World War II,  by the Casavant Frères Company located in Saint-Hyacinthe, Quebec, Canada who moved their operations to a factory in Detroit and continued to build pipe organs along with parts and supplies for the war effort.  Our organ, therefore, was a unique hybrid of Canadian and American workmanship.  Pictures of the organ being dismantled to be sent to Canada! 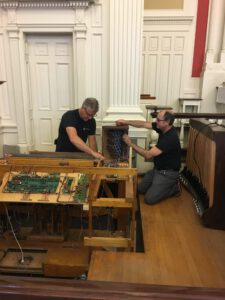 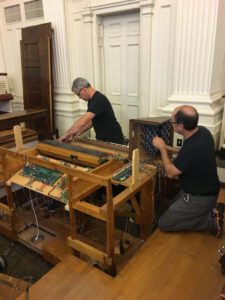 The organ consisted of 3 manuals and pedals and had 73 stops, 62 ranks, and 3879 pipes.  St. Paul’s organ was the largest pipe organ in York.  The organ company came and took the 80 year old organ console in late June 2017 and used it as a sort of model as they prepared our new console.  At the same time, some of the pipes were taken out of the organ chambers to be sent back for tonal work to the organ factory at Orgues Letourneau in Canada.  The organ pipes in the chambers were covered in plastic to protect them from the demolition work that was occurring.  The pipes and the windchests needed to be protected from flying dirt and debris.  These are some of the worst enemies for an organ which can cause havoc if not protected properly.  The new console was designed so that it works harmoniously with our existing pipe work which is hidden away in the chambers beside and above the chancel.  Dr. Hershey designed the console for our organ in 1940.  He made choices and decisions about how the organ console would operate and connect with the existing pipes in the chambers.  At that time, he made sure that those decisions led to an organ console that was state of the art and provided long lasting service to the congregation for nearly 80 years!

Since then many new things are available for musicians.  Now it is our own musician Victor Fields who worked with the organ company to insure that the new console for St. Paul’s is state of the art.  After months of research, discussions and meetings with organ builders, we embarked on the next chapter of St. Paul’s beloved organ.  The next chapter of our Casavant organ includes the following:  a brand new handmade movable organ console fitted with a new computer operating system.  The new console has a total of 100 stop knobs.  The operating system includes a record and playback system on the console and a remote iPod.  Additions of new and re-voiced pipes!  The organ has 63 ranks and a total of 4,050 pipes.  There are 10 new attractive grill cloth screens covering the organ chambers for both visual beauty and sound to flow evenly and freely.  St. Paul’s has a truly stellar pipe organ. The console is an elegant and beautiful addition in our newly remodeled Sanctuary and continues to be the largest pipe organ in York.  It is one of the most versatile instruments in our region.  New organ console pictured below:

We will tell to the coming generation the glorious deeds of the Lord and the wonders that God has done.

Praise him with the strings and pipe,

Let everything that has breath, praise the Lord.

In addition to the organ, the church sanctuary is home to a 1992 Steinway & Sons Model D Concert grand piano which is used for worship and in concerts and recitals and a harpsichord.