We are led in worship, mission, outreach, and service by The Reverend Stanley Reep. 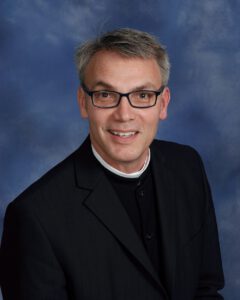 Rev. Reep is a graduate of the Lutheran Theological Seminary at Gettysburg, PA, and was  Ordained in 1988. Before coming to York, he served congregations in Palmyra, Beaver Springs and Beaver Falls, Pennsylvania.

He was called to St. Paul’s Lutheran Church to become the eleventh senior minister in 2004. On September 9, 2018,  St. Paul’s congregation celebrated his 30th Anniversary of Ordination.

Congratulations Pastor Reep on your 30th Anniversary of Ordination; a milestone of ministry serving Christ and his church.

The Pastor’s love of God is made known through preaching, teaching, music and art.  His enthusiasm for ministry both locally and around the globe is evidenced  in the breath of the ministry carried out by our congregation.

In June 2017, Pastor Stanley Reep earned a national award for stewardship ministry by the Evangelical Lutheran Church in America. The Good Steward Award is given annually to the church leader who exemplifies outstanding stewardship through preaching, teaching and example. The Good Steward award is in honor of Dr. Richard Lee Peterman and was established in 1984 (the year Pastor Reep began seminary) by the Lutheran Laity Movement for Stewardship. It honors the pastor that has shown the importance of stewardship by using innovative programs, new resources or made significant gains in stewardship during the last year or over a longer period of time. One recipient is presented the award along with a check for $500 for the use in the congregation he or she serves. This year Pastor Reep donated the $500 toward the Building in Faith for Future Generations campaign at St. Paul’s Church. We rejoice with him and with his family for this national honor.

Thank you Pastor Reep for doing God’s work in our Congregation and in our community and for looking out for us through the renovations.